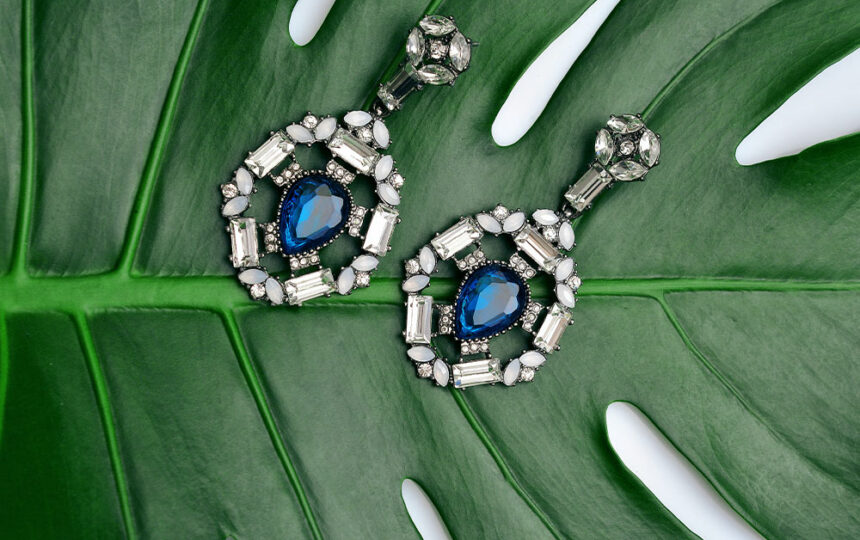 One of the four precious gemstones, sapphires are sourced from the corundum mineral. Sapphire is a stone believed to be good for attracting blessings, abundance, and gifts. Moreover, it is also used to calm the mind, protect against negative energies, invite spiritual clarity, and strengthen intuition. These stones are most commonly known for their striking color – blue, but they also appear in other colors – purple, pink, yellow, white, and green.

Sapphires – Historical glance
Sapphires and sapphire jewelry are often prominently found in numerous beliefs, past and present, but they have also been used for healing rituals and astrological prophecy throughout centuries. In the earlier days, it was believed that precious gemstones, including sapphires, had virtues that would benefit man. Hence sapphires have been famously known as a gemstone with a heavenly touch.

What do Sapphires look like?
Blue sapphires have remained popular and come in various colors and types. Although sapphires are naturally formed, they can possess certain flaws and inclusions. But these flaws are not to be taken as a drawback. These inclusions prove that the gemstone is genuine and unique, making them a good choice for jewelry. Moreover, in most cases, flawless sapphires are lab-created.

Sapphires – What are they made of?

Naturally formed Sapphires
Sapphires are gemstones with origins in the mineral corundum – a crystallized form of aluminum oxide. Corundum usually forms in crystalline rocks containing different types of gemstones, according to other minerals present during its formation. This amalgamation then works together over thousand years to produce rare, beautiful, coveted gemstones such as sapphires.

Color
The most important factor during the buying process is the color of the sapphire. However, one must also check for the measurements of hue, saturation, and tone to ensure the gemstones are not colorless, dull, or gray.

Hue
The hue of a sapphire usually describes the gemstone’s balance of color. For instance, in blue sapphires, one can call it an intense purple, slight purple, slight green, or strong green. Furthermore, the closer one gets to the “true” blue, the more expensive the gemstone gets.

Tone and saturation
The tone of the sapphire describes how light or dark the stone is. This may range from very light to very dark. If one wishes to choose a sapphire, the medium to the dark range is the best choice as the look of the lighter sapphires is more watered down. Finally, the saturation tells the vibrancy of the color – ranging from weak/dull to vivid.
Hence, it’s important to remember that the most desired sapphires will possess a highly saturated and vivid color without any areas of brown or gray.

How to buy a suitable Sapphire – Which type to choose?
When most people hear sapphire, the extremely popular blue comes to mind. But the stone does come in different colors, and the price of this precious gemstone often depends upon its color. Hence, here are some of the types of sapphires to choose from.

Blue Sapphire
One of the most desired and popular colors (in sapphires), blue, is mined in various locations, and the different environments produce varied results. For instance, some countries are known for some of the clearest cornflower blue sapphires, and others are famous for producing lighter green ones. This type of sapphire comes in a range of blue shades and is known to be one of the finest precious gems in the world. Some blue sapphires are teal sapphire, Ice blue sapphire, and corn blue sapphire.

White Sapphire
White sapphires are known to be colorless and contain no trace elements. This precious gemstone is extremely rare; most lab-created ones have removed traces. White stands for joy, purity, and mental clarity and can be bought as an excellent alternative to a diamond engagement ring.

Pink Sapphire
Pink or red sapphires are the perfect choices for romantics, as the stones symbolize love and compassion. Earlier, pink sapphires were a rare find, but due to a large deposit, this gemstone has become incredibly popular. The colors of the stone can range from pastel pink to hot pink, and the more intense ones have only grown in the form of sapphire jewelry pieces.

Conclusion
Buying a Sapphire involves fewer technicalities than buying a Diamond, as the latter is sought-after for its brilliance, while the former is treasured for its color. Unlike diamonds, sapphires and other gemstones do not have a grading standard due to their variety in colors and characteristics. With so many different types of sapphires available, one can choose the best according to their personality, the stone’s meaning, and color.

Q1 : Is a perfume subscription worth it?

Fragrance subscriptions that offer trial-size samples to help you uncover your perfect scent. Over the past decade, a growing number of subscription services have popped up in the beauty industry. Not only are they intent on helping consumers save money and space, but they also foster a newfound appreciation for the global perfume and cologne marke

Q2 : For whom are perfume subscriptions meant for?

Whether youre the type of person who wants a different scent for every occasion and mood but you cant always justify the price or you do most of your shopping online and know that spending hundreds of dollars on a fancy perfume or cologneâwithout actually smelling it IRLâis a lil risky, fragrance subscription services are an easy solution